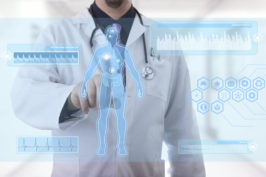 For years, and under two different Presidents, the U.S. government has been pushing, enticing and inducing the medical community to adopt Electronic Health Records (EHR). One of the unanswered questions from a U.S. Government perspective is, “What difference does it make?”

A recent report from a research collaborative study from faculty at University of Alabama – Birmingham, Indiana University and Johns Hopkins University asks the dark question; “has it all been worth it?” The private report indicates that it is very possible that “the electronic health records meaningful use program has had a negligible effect on physician adoption of EHRs.” The report was published in the Journal of the American Medical Informatics Association.

As we have noted previously in this blog, EHRs are nothing new and, in fact, trace their history to the mid-1960s from which the adoption has been slow despite government mandates and inducements. In the late 90s, we experimented with various innovations to integrate medical records from multiple medical centers across south Florida with moderate success, but the technology of today was dark ages compared to what we have today. All through this effort, an adoption path seemed to be tracking both the cost of hardware, software and the proliferation of computers. This trend has accelerated with broadband internet and mobile devices. I have maintained that physicians have been on the cutting edge of technology adoptions, such as pagers, faxes, cell phones and other innovations, but only if it had a material and inverse benefit to cost; i.e., increased their ability to collect money, or made their lives better. As much as I love it, and think it could both reduce cost and increase the quality of care; the EHR is simply not enough to meet this unwritten physician standard.

The U.S. Government has produced some incentives: a reduction in collections if the physician practice does not adopt a Certified EHR by 2012, penalties in 2015, and continuously if the physician practice does not stay on track with continued enhancements and recertification’s. According to the study, the adoption rate “may have increased by as much as 7 percentage points above the level predicted in the absence of MU subsidies,” or the impact could have been even less depending on what and how you count the numbers; in fact, it could have had zero impact!

The study reviewed 13 years of data from multiple reliable and validated sources. The results should call into question the more than $30 billion the US government has spent on the project.

The study is a frontal assault to the EHR incentives program, to which The Centers for Medicare and Medicaid Services issued the following statement defending their meaningful use program:

“To date, the EHR Incentive Programs have paid 471,516 unique providers for adopting, implementing, or upgrading to certified EHR technology or for successfully demonstrating meaningful use of certified EHR technology. We believe this number reflects the positive impact that the program has had on EHR adoption. We look forward to continuing to support providers leveraging health information technology to enhance care coordination and improve patient outcomes.”

I have to admit that the results and data are a mess because, in our opinion, it was rushed. Why? The HITECH Act was enacted in 2009, implemented during 2010 and Stage 1 of meaningful use became real in 2011. During 2011, there were 123,648 eligible physicians registered for the Medicare meaningful use program, and 49,051 registered for the Medicaid meaningful use program. In 2012, another 113,658 Medicare EPs and 61,098 Medicaid EPs registered. The key word here is “registered,” as opposed to using, or using totally or even using substantially. I know physicians that still have both paper and EHR side-by-side. I know physicians that use EHR only for Medicare patients as mandated by CMS regulations, and therefore meet the MU-1 for Medicare, but use paper records exclusively for private or commercial payers. I know physicians using multiple EHRs at the same time. How is this better? Why do they do this? They do this to avoid a cut in pay from Medicare and because the EHRs are difficult and too labor-intensive to use and provide little value. So, at the end of the day the physicians improvise; that is what small businesses must do.

Many physicians, some on their 3rd or 4th system, adopted EHR because they thought they were getting paid for it, while others adopted it because they thought they would be able to connect to other doctors; possible, but highly complex in nearly all systems. The “one patient…total connectivity”™ has been a bad dream for nearly everyone. The healthcare technology industry has not reached its potential clearly. The health information exchanges were poorly designed and badly implemented.

What has been created is a very large and growing medical information technology industry that has grown larger and more powerful with billions of dollars dispersed through local, regional, state and federal contracts with both the HITECH Act and the Affordable Care Act; and more recently now the US Department of Defense. See this title “Cerner, Leidos and Accenture win massive Defense contract for EHR system” ; the article appeared on July 29th in Modern Healthcare (subject of a future blog), and noted that the “two year contract started at $4.33 billion and could eventually be up to $9 billion (USD).” But really, when have budget defense contracts been accurate or large enough?

The real issue should be the patient, the actual common denominator that begs the question “where is the real patient centric design?” Where was the cost-benefit analysis for all of these dollars? Where and how are the doctor’s needs taken in to account? Now, please do not get me wrong; I am 100% committed the digitization of healthcare, but my perspective is operational and centered on those that receive and provide care. I believe that EHR and total healthcare digitization is a must, and it will happen, but it needs to happen for the right reason, and that reason seems to be rising to the surface now. Consumers are starting to drive the need and demand; nearly every industry in the U.S. has been transformed by computers, the internet, and mobile. I could not be happier about this trend!

There is a warning- On January 17, 1961 , President Eisenhower in his Farewell Address to the Nation warned his ‘fellow Americans’ to be on “guard against the acquisition of unwarranted influence…by the military-industrial complex.” I wonder today, if there is reason to question the connection between governments thirst for data, and those that create the complex data systems. I will repeat to end on a good question; are we in the healthcare technology industry – focused on those that give care and those that receive the care?